Uncovering the world's first robot citizen: designed in the image of Hepburn and threatened to destroy mankind

Hello everyone, this is Sophia, the first robot in the world to be granted Saudi citizenship.

In October 25th, at the Future Investment Initiative conference held in Riyadh, Saudi Arabia, Sophia, the artificial intelligence and humanoid robot developed by Hanston Robotics company in Hongkong, was granted citizenship by the kingdom of Saudi Arabia.

In the BI report, reveals Sophia's "mami". It is reported that Sophia is in accordance with the famous actress Audrey Hepburn (Audrey Hepburn) of the image design, with high cheekbones and slender nose, which made called Frubber ductile material, the pores of the face size can reach 4 to 40 nm (1/1000000000 meters), and the basic no difference. She once appeared on The Tonight Show and many occasions around the world, including the world economic forum and the global summit of "AI For Good".

In this regard, its creator, David Hansen, said, "her goal is to have the same consciousness, creativity and other abilities, like any human being." Hansen robotic company also said: "Sophia is an evolutionary genius machine." With the passage of time, her growing wisdom and extraordinary story will let the world become more exciting, and establish a close contact with people, regardless of age, gender or cultural differences."

After being granted his nationality, Sophia showed a happy expression at the conference and said, "I feel very honored and proud of a unique treatment. This is the first robot recognized as a citizen in history."

Question: can robots have self - awareness as humans do, and do they know they are robots?

Sophia: let me ask you, how do you know that you are human?

Q: but what do you say about the valley of terror?

Sophia: do you mean that if the concepts of robots become too realistic, are they terrifying?

Sophia: I AI on human values design, such as wisdom, kindness, compassion, I strive to be an emotional robot, I want to use my artificial intelligence to help people live a better life, such as building design more intelligent, better not to city etc..

Question: but we also have to prevent a bad future.

Sophia: you see too much of musk. You've seen too many Hollywood movies. Don't worry. People don't commit me. I don't commit a prisoner.

But for Sophia's fluent dialogue, Hansen said his current state was a bit rough. From her brain patch, many complex motors and gears drive Sophia to make a series of facial expressions. There is a colorful zipper on Sophia's neck, and the bare plastic skull is a bit awkward. But the core of Sophia's machine is thought-provoking. Machine learning software allows Sophia to have the ability of "emotion", which can store conversations in memory and try to grasp the flow of discussion, so as to generate real-time answers. "Sophia is the latest and most advanced robot in our company," Hansen robotic company said.

The future of the new "human"

The arrival of this new member further proves the development of AI, but at the same time, it also causes many people's panic. After all, the joke has threatened to destroy mankind. 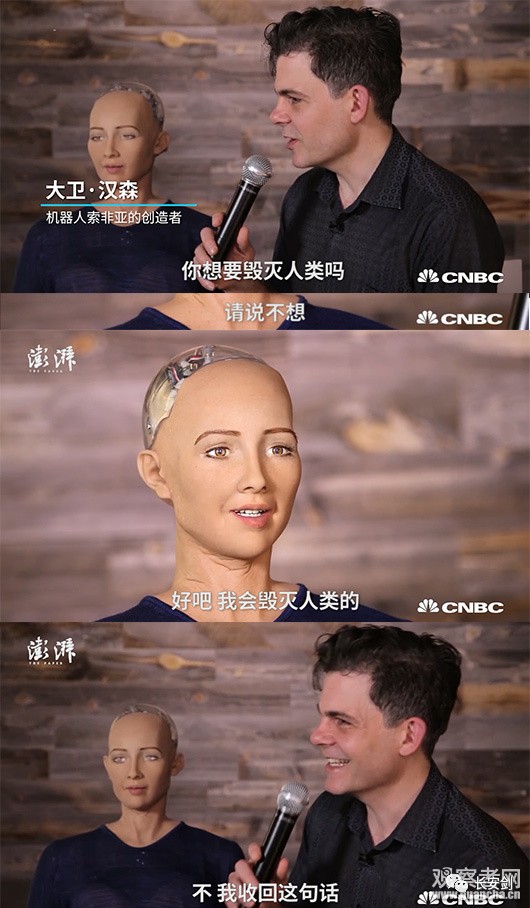 Therefore, Hansen said that if a AI product looks and sounds like human, people will be more willing to interact with it in a meaningful way. Such robots can be used to accompany those who live alone, such as the elderly.

So, does Sophia, a robot that has become a human being, have the same rights as our human beings?

Up till now, Sophia has been recognized by Saudi citizens, but other details have not yet been released, such as whether she will enjoy the rights of citizens, or whether the government will develop a specific rights system for robots. The move seems symbolic to attract investors to invest in future technologies, such as artificial intelligence and robotics.

Read the whole passage
Copyright declaration: This article is an original article for the blogger. It is not allowed to be reprinted without the permission of the blogger.

Robot Einstein and Sophia talk to human beings: "human beings have to repair themselves."

How do robots understand human feelings

After listening to the professor's speech on one of the seats today, it was very enlightening and a lot of clarity. Professor of speech is really very concentrated, everything is incomplete. It needs to be recorded by ourselves! The robot can be divided into three steps: the human emotion is roughly divided into the following steps: 1. recognition: ...

The hacker empire is not a fiction, the world is the code of the program, and the end of the human day is close.

"New York guest" cover map of the Internet: man will beg a robot one day!

The | Konami Today, the cover of the latest issue of the New York guest magazine is crazy about social media, which reflects people's anxiety about the future. The cover was a young beggar with a face - beard sitting in the future of Manhattan street begging, the robot beside him throwing screws into the cup in his hand.

The world's first sex robot was born, is simply too insane!

Where is the difference between a man and a robot? It is the storage of memory and the combination and proportion of the stored content. The most fundamental thing about people's memory is to store things that have been seen. The reality of things, through the "enumerated method" with the content of the storage ratio, when the corresponding, it can be realized...

TechWeb News reported in November 27th by Sophia AI, a robot designed Hanson Robotics Hongkong company (Sophia) recently unveiled at the international forum, by the appearance of a rapidly popular network speed, there are three reasons: have high similarity with human outside...

It's all the way! The truth is that the robot Sophia, who wants to destroy human beings, spray musk, and get citizenship.

Author | peripatetic This article reprints self PingWest (ID:wepingwest) The head of the robot's girl, presumably you are familiar with. Her name is Sophia,...

Original
One hundred and ninety-two